The Semiotics Of "Juvenile Delinquent" Vs. "Youthful Offender" 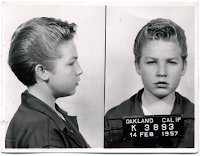 I began my quasi-bogus career as a "juvenile delinquent" at the age of eight when I shoplifted five sticks of red licorice from the local five-and-dime. Later I expanded my imaginary rap sheet when, as an angry fifteen year old, I stalked into the playground behind my old grammar school after supper and broke half a dozen windows. Or more. Maybe a lot more, I don't quite recall. It was after dark, it was winter, the grammar school had been closed for good anyway (it would later be gutted and turned into condos), and there were huge chunks of ice and frozen snow lying around. My vandalism was both convenient and redundant. No one cared about some kid busting up a joint that was gonna be demolished anyway. Still, vandalism is vandalism, and this adventure made the little devil in me very proud. I could now apply to myself that grandiose term "juvenile delinquent". This was a bit of bureaucratese that someone dreamed up in the late forties or thereabouts to make bad kids sound like some kind of official social problem. For all its fancy-ass syllables, "juvenile delinquent" became an iconic phrase, spreading meme-like through the movies and the press in the fifties, sixties, seventies and beyond, gathering images and acolytes as it rolled like a big black tarball down the hills and valleys of the American soul. James Dean. Elvis Presley. Marlon Brando. Vinnie Barbarino. Michael Madsen and Mickey Rourke, even. The Blackboard Jungle. Rebel Without A Cause. The Outsiders. Jailhouse Rock. Switchblades and bicycle chains. Guys with ducktails in leather jackets with upturned collars, smoking, sneering, raising hell. Somehow this pompous euphemism that was meant to elevate the seriousness of teenaged crime merely gave it a legendary gloss. And then, eventually, although I don't remember exactly when it happened - probably during the PC late eighties-early nineties - a new euphemism appeared.

The latest legal moniker for bad kids is "youthful offender". It isn't very Latinate and it doesn't have the musty bureaucratic quality of the older term. It doesn't evoke police stations with file cabinets against the walls and typewriters on the desks, judges sentencing you to the "reformatory", and grimly hysterical mothers in flounced dresses weeping themselves silly. The "youthful" part of it makes the term sound almost hopeful, as if the "offender" deserves to be treated lightly and given another chance. As such, it conjures up, if not police precincts and the courts, the Politically Correct dictatorship of a college campus, in which everything that is said, about anyone, must be neutral and respectful and only blandly descriptive. "Youthful offender" is actually an even purer, fakier euphemism - surely one that can never face up to the reality of fourteen year old sociopaths with souls as old as evil itself. The only good thing about it is that it sounds so lightweight and stupid that no self-respecting "bad kid" would want to claim the title. It almost sounds like something your mother would say. That is, if she were some middle class Pollyanna who smelled nice and belonged to a book club. Nowadays, about the only time you hear even a faint echo of the older term is when Chris Meloni refers to "juvie" in Law And Order: Special Victims - and I'll bet there are more than a few kids who, with puzzled looks on their faces, ask their parents WTF that means.

Jimmy Elliott
I'm a true Renaissance Rapscallion, with lots o' irons in the fire and dark mischief in my soul. 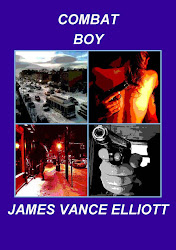 Combat Boy is set in two time periods, ranging from the free-wheeling, chaotic 1970's to the 1990's with its McMansions and high-tech easy money. It is a tale of fathers and sons, the conflict between Boston Irish hoods and their aspiring middle-class cousins, the ambivalence of men towards their own violence - and much else. Click on the image to buy the ebook or read a sample.